Ocasio-Cortez Slaps On Mask For A Photo Op, Then Immediately Removes It, Video Shows

A video showed Democratic New York Rep. Alexandria Ocasio-Cortez on the steps of the U.S. Capitol with a large group of people while wearing no mask and then putting one on for a photo opportunity.

In the clip shared on Twitter on Wednesday, we see the Democratic New York Rep. surrounded by a group of people who were doing a sit in for an extension of the national moratorium on evictions. In the shot, it appears she’s not wearing a mask and a handful of others aren’t wearing one. (RELATED: Alexandria Ocasio-Cortez Says ‘Absurdly Cruel’ US Embargo Is Partly Responsible For Cuban Suffering)

It is then decided that a photo should be taken to keep the “pressure up” on other colleagues, the video shows. At that point, Ocasio-Cortez and others appear to grab their masks and put them on.

AOC joins in on the DC mask theater for a photo op, only to remove it as soon as the camera is down. pic.twitter.com/cRQwE6yy9U

The group then said together, “housing is a human right” and the photo is snapped. (RELATED: AOC Scolds Republicans That Are Pro-Life But Don’t Support The $15 Minimum Wage)

A message comes across the video that reads, “One minute later,” and Ocasio-Cortez can be seen sitting amongst the group without her mask on as she smiles and talks to others. There is no shot of her taking the mask off.

Photos from Getty Images and on social media indicate the video was taken on Tuesday during an event organized by Rep. Cori Bush where Ocasio-Cortez and others gathered to protest the expiration of the federal eviction moratorium., Newsweek reported. Ocasio-Cortez’s attire matches the ones in photos from the day. In several pictures, the New York Rep. is not wearing a mask. 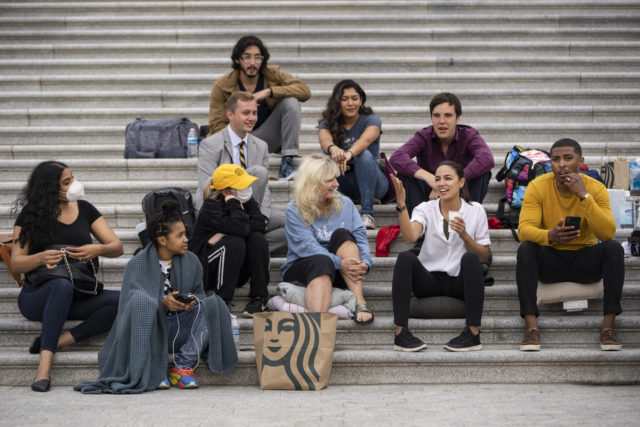