A female state trooper who has accused Democratic New York Gov. Andrew Cuomo of sexual harassment is still on a detail protecting him, the Daily Caller News Foundation has confirmed.

New York State Police Director of Public Information Beau Duffy told the DCNF Friday that the accuser known as “Trooper #1” in the investigative report is still a member of the Protective Services Unit (PSU) of the New York State Police, a unit that Cuomo specifically requested she be transferred to, according to a report by the New York attorney general’s office.

“We have taken steps to address any concerns,” Duffy told the DCNF. “We are not going to get into specifics about those actions.”

The report also confirmed when it was released that Trooper #1 was a current member of the PSU and became a trooper in January 2018.

During a Friday press call with reporters, attorney Rita Glavin addressed questions about Trooper #1, who told investigators that she met Cuomo at an event on the Robert F. Kennedy Bridge in November 2017 where he requested that she be transferred to the unit protecting him.

Cuomo sexually harassed the female New York state trooper “on a number of occasions,” the report said, including by “running his hand across her stomach, from her belly button to her right hip, while she held a door open for him at an event,” by “running his finger down her back, from the top of her neck down her spine to the middle of her back, saying ‘hey, you,’ while she was standing in front of him in an elevator,” and by “kissing her (and only her) on the cheek in front of another Trooper and asking to kiss her on another occasion, which she deflected.”

Glavin, who is representing the Executive Office of the Governor, said that Cuomo had asked for Trooper #1 to be transferred to his security detail because she was “impressive” and maintained good eye contact — not because he took a sexual interest in her.

Glavin could not say what protective measures are being taken to protect Trooper #1 against retaliation from the governor.

“The governor has a view of this particular trooper that is positive in terms of her job and day-to-day,” the attorney said. (RELATED: Staff Of Largest LGBTQ Advocacy Group Reportedly Demand President Resign For Helping Cuomo Discredit #MeToo Accuser)

“Look, the whole world is watching right now,” Glavin said. “People are not going to be retaliated against by Governor Cuomo.”

Glavin also told press that the report released by the New York attorney general’s office includes “contrary facts and omissions” and insisted that both the American public and Cuomo’s attorneys should be able to view the transcripts of the hundreds of interviews conducted throughout the investigation.

“Investigators acted as prosecutors, judge, and jury,” she said, adding that “This was not an exercise in truth finding.”

The attorney said that Cuomo was “ambushed” and that he deserves to be treated fairly.

“Give us the opportunity to review the evidence,” she concluded. 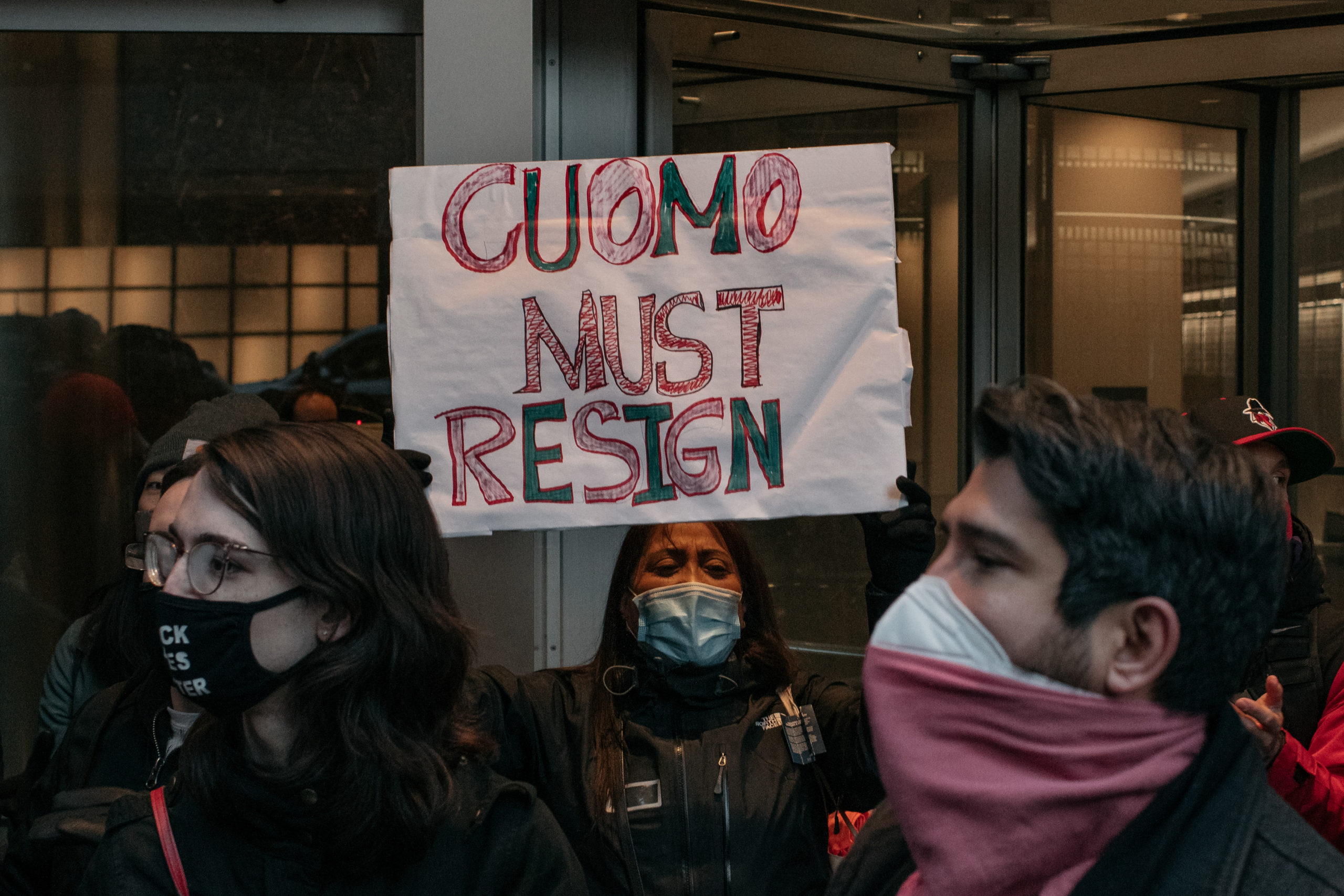 Demonstrators call on New York Gov. Andrew Cuomo to resign at a rally on March 2, 2021 in New York City. Calls for Cuomo’s impeachment or resignation have escalated in the wake of multiple women coming forward to accuse the governor of sexual harassment. (Scott Heins/Getty Images)

Cuomo has denied repeatedly that he ever inappropriately touched anyone, and said Tuesday that those attacking him are discrediting “legitimate” victims of harassment.

The attorney specifically cited the report’s discussion of “Executive Assistant 1,” who accused the governor of groping her when she was at the governor’s mansion in November 2020. Glavin said that the governor’s lawyers used the evidence provided to determine that the accuser was referring to November 16, 2020.

Cuomo’s attorneys reconstructed the events of that day, using entrance and exit records, emails, schedules and more, according to Glavin.

“This woman’s story is false,” Glavin said. “The documentary evidence does not support what she said.” (RELATED: Cuomo Sexually Harassed State Trooper Assigned To Protect Him, Investigation Finds)

About a half an hour later, the accuser reportedly emailed a colleague again and said, “Hey, the gov just came in and said he was good. Do you need me to do anything else for you before I head back to the cap.”

Glavin insisted that the emails disproved the accuser’s story, saying the report did not include these details, which she called significant.