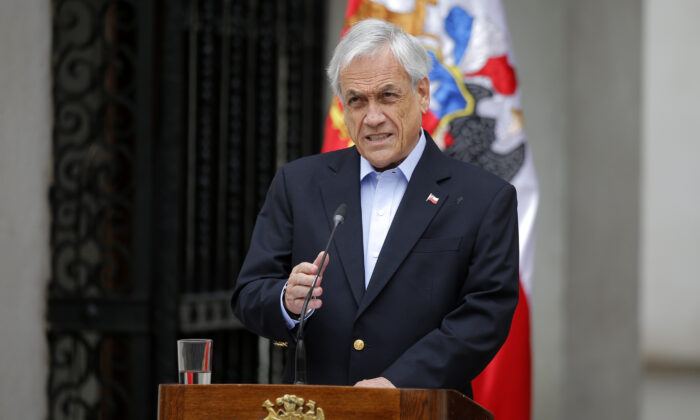 SANTIAGO—Chilean President Sebastian Pinera unveiled an $82.1 billion draft budget for 2022 on Thursday, that he said would begin to tame a ballooning deficit in the world’s top copper producer following more than a year of emergency spending to combat the COVID-19 pandemic.

In a televised speech, the center-right president said the budget would reduce the structural deficit from 11.5 percent of gross domestic product in 2021 to 3.9 percent of GDP in 2022.

“This represents…a necessary step forward in the recovery of fiscal balance, in the stabilization of the public debt, and in the strengthening of the permanent pillars of the economic growth and human development of our country,” Pinera said.

Chile’s economy has roared back from months of budget COVID-19-induced stagnation, buoyed by a world-class vaccination campaign, and a raft of stimulus measures unleashed by the government.

But those measures, Pinera said, had seen the 2021 budget balloon by $27 billion, or 33.7 percent above what was approved by lawmakers last year—a total equivalent to nearly 10 percent of GDP.

“This level of fiscal deficit and that increase in debt are not sustainable over time,” he said.

The new budget would see spending fall approximately 22.5 percent from the total predicted outlay in 2021, including emergency measures, but still represents a 3.7 percent increase over the baseline 2021 budget initially approved by lawmakers last year, Pinera said.

The budget allocates fresh funding for housing, public works, and new infrastructure for the 2023 Pan American Games, which will be held in Santiago, the capital, Pinera said, as well as a heavy emphasis on healthcare.

Pinera said Chile, among the first countries in the world to begin administering booster vaccine shots against COVID-19, has already secured the vaccines it needs for 2022.

The budget, he said, also dedicates funding to combat a debilitating drought that has spread across much of central and northern Chile, as well as climate change.

Lawmakers now have 60 days to review and approve the budget.