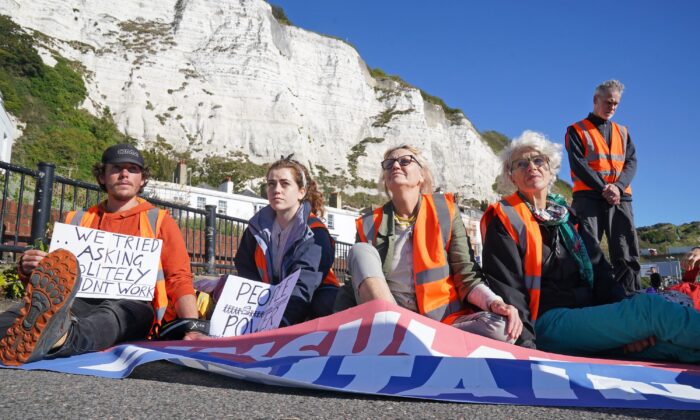 Protesters from Insulate Britain block the A20 in Kent, which provides access to the Port of Dover, on Sept. 24, 2021. (Gareth Fuller/PA)

Climate campaign group Insulate Britain escalated their protest action on Friday by blocking the Port of Dover, the busiest ferry port in Europe, despite the government’s warning that they face possible imprisonment if such disruptive protests continue.

More than 40 people blocked the A20 in Kent, which provides access to the Port of Dover. Their action led to vehicles attempting to cross the English Channel being stuck in queues on the A40 road.

We are currently dealing with protest activity which is causing traffic disruption in #Dover. Officers have arrested seventeen people and the Snargate Street and #A20 at the junction with #Aycliffe sites are now clear. https://t.co/7d7Q23jOHr

Earlier this month, Insulate Britain, which is demanding government action to insulate homes to cut emissions, shut down parts of the UK’s busiest motorway M25 five times in just over a week.

Transport Secretary Grant Shapps said on Wednesday that National Highways had been granted an injunction against the protests, and activists would face possible imprisonment if they make further such attempts.

But the group was not deterred and swung back into action just two days later.

A spokesperson for Insulate Britain said on Friday: “We are blocking Dover this morning to highlight that fuel poverty is killing people in Dover and across the UK. We need a Churchillian response: We must tell the truth about the urgent horror of the climate emergency. Change at the necessary speed and scale requires economic disruption.”

Kent Police said it has arrested 17 people over the protests at the Port of Dover.

Responding to protests, a government spokesman said: “The demonstrations we have seen over the last few weeks have wreaked havoc on our roads, disrupted thousands of people and put lives in danger, and we are taking action to prevent these kinds of guerrilla tactics being used in the future.”

“We thank the police for their quick and decisive action to remove the protesters and keep the port open,” he said.

The Port of Dover handles 17 percent of the UK’s trade in goods. It was used by an average of 6,200 road haulage vehicles every day last year.

The blockage comes amid disruption to supplies across the UK due to a shortage of lorry drivers.

The Port of Dover said in a statement: “Port of Dover confirms protesters are currently blocking the entrance to the port. Please allow extra time for your journey and check with your ferry operator for updates. The port remains open.”

PA contributed to this report.