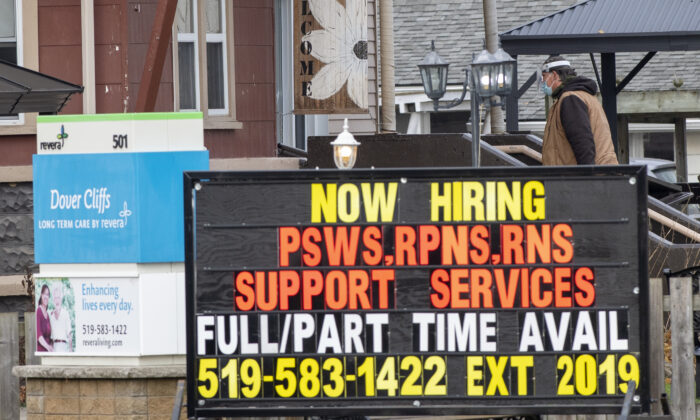 A masked worker walks behind a hiring sign on his way into the Dover Cliffs long term care home in Port Dover, Ont. on Nov. 13, 2020. (The Canadian Press/Frank Gunn)

Employers are having a hard time hiring workers, are pushing them to work longer hours, and are rejecting new orders, which is hampering growth for the majority of Canadian businesses, a new study says.

Published by the Business Development Bank of Canada (BDC), the study (pdf) found 55 percent of small and medium-sized businesses in Canada are struggling to hire the workers they need, with 64 percent of entrepreneurs reporting that the labour shortage is limiting their growth.

Forty-four percent of the entrepreneurs delayed or failed to deliver orders to their clients.

The labour scarcity has led 61 percent of business owners to increase their own or their employees’ work hours, while 49 percent had to provide more wages and benefits.

“As the economy recovers, this scarcity of workers is reaching worrying heights, putting economic growth at risk and compromising the competitiveness of Canadian businesses,”said Pierre Cléroux, Vice President Research and Chief Economist at BDC in a news release.

“Fortunately, while labour shortage is here to stay, entrepreneurs can take key actions to limit the impact of this situation on their growth,” he said.

The labour shortage is spread out across various sectors in the country, with the hospitality industry and the food services being hardest hit, according to Statistics Canada’s latest data on job vacancy rates.

The BDC says that seeking higher wages (57 percent) is the main reason workers will change jobs in the next year, followed by seeking more benefits (32 percent).

The study also found that the pandemic has led to a sector migration within the labour market, with roughly 20 percent of workers who lost their jobs moving to a different field of employment.

The BDC study includes a survey of over 1,200 Canadian entrepreneurs and another survey of 3,000 workers on the impact of the labour shortage on their jobs.

Andrew is a reporter based in Toronto.