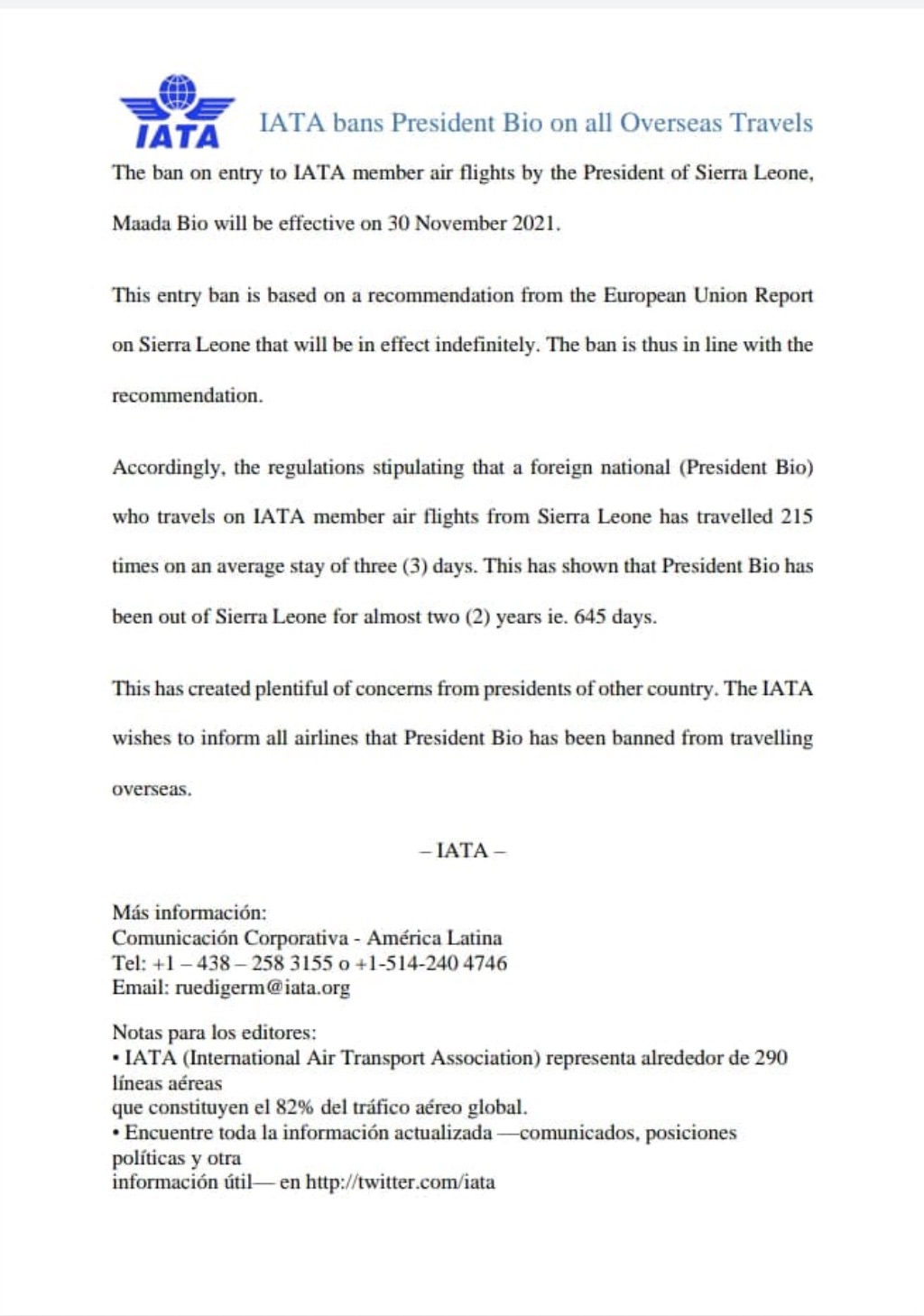 There is no record of the IATA releasing the letter.

The IATA, a trade association, represents about 290 airlines across the globe, according to its website. The image in the Facebook post supposedly shows a letter issued by the organization titled, “IATA bans President Bio on all Overseas Travels.”

“The ban on entry to IATA member air flights by the President of Sierra Leone, Maada Bio will be effective on 30 November 2021,” the purported IATA letter reads, in part. “This entry ban is based on a recommendation from the European Union Report on Sierra Leone that will be in effect indefinitely. The ban is thus in line with the recommendation.”

The letter, however, appears to be fabricated. The IATA has not published a press release on its website containing the language in the document, nor has it shared such a statement on its verified Facebook or Twitter page. A search of the European Union’s (E.U.) website also didn’t return any matches for a report recommending Bio get banned from flights operated by IATA member airlines.

“Please note that the document is not from IATA but a forgery,” the IATA’s corporate communications team told Check Your Fact in an email. “IATA has on no occasion issued such a letter.”

A spokesperson for the E.U. also confirmed to Check Your Fact in an emailed statement that the claim that the E.U. has recommended Bio be banned from air travel “is not true.” (RELATED: Does This Image Show Dozens Of Private Jets At The UN’s COP26?)

“The EU is not issuing bans on anyone to prevent them to take a domestic or international flight. There is no EU regulation to ban a specific person to board an aircraft – it is for every carrier to make their own health safety assessment and evaluate whether or not take a person on board. There is no regulation to oblige carriers not to take a specific person on board,” the E.U. spokesperson said. “What the EU does is putting people on sanctions lists for violations of human rights or international law, which means they are then subject to travel ban, assets freeze or both.”

The E.U. spokesperson also noted that “there is currently no sanctions regime related to Sierra Leone.”

Check Your Fact did not find any major media outlets reporting the IATA or the E.U. had called for Bio to be banned from flights. In October, after Bio signed a law abolishing the death penalty in Sierra Leone, an E.U. spokesperson issued a statement calling the action an “important achievement” that would “not have been possible without the commitment of the Parliament and the Government.”