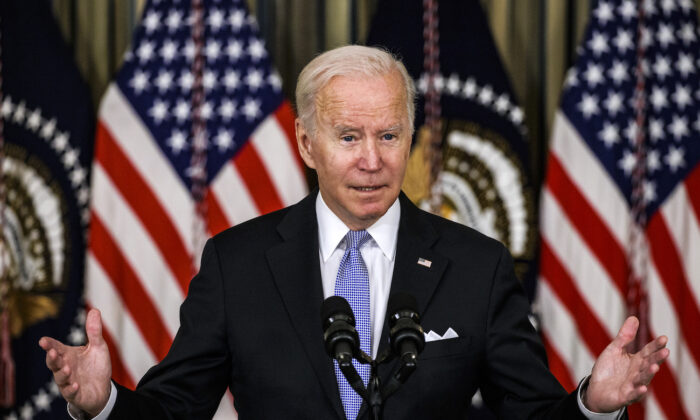 President Joe Biden speaks during a press conference in the State Dining Room at the White House in Washington, on Nov. 6, 2021. (Samuel Corum/Getty Images)

The measure, H.R. 3919, was approved unanimously by the Senate on Oct. 28 and earlier in the month by the House on a 420-4 vote. It requires the Federal Communications Commission (FCC) to adopt rules clarifying it will no longer review or approve any authorization application for equipment to companies on its “Covered Equipment or Services List.

Five Chinese companies are on the list: Huawei, ZTE, Hytera, Hikvision, and Dahua. The FCC in March designated the five companies as posing a risk to U.S. national security under the Secure and Trusted Communications Act of 2019, a law that seeks to protect U.S. communications networks.

Sens. Marco Rubio (R-Fla.) and Ed Markey (D-Mass.), in a statement earlier this month, said the Secure Equipment Act acts to close a loophole in rules the FCC formally adopted in 2020, which required U.S. telecommunications carriers to “rip and replace” equipment by national security threats.

“While that was an important step, those rules only apply to equipment purchased with federal funding. The very same equipment can still be used if purchased with private or non-federal government dollars,” they said in a joint statement, noting that the measure will “close this loophole and further prevent identified security threats from having a presence in U.S. telecommunications networks.”

The FCC in June had voted unanimously to advance a rule that mirrors the now-passed law. The rule, which drew opposition from Beijing, would ban approvals for equipment in U.S. telecommunications networks, and would also revoke prior equipment authorizations issued to Chinese companies.

Reuters contributed to this report.

Mimi Nguyen Ly is a world news reporter based in Australia. She holds a bachelor’s degree in optometry and vision science. Contact her at mimi.nl@epochtimes.com.