FACT CHECK: No, Gavin Newsom Was Not Arrested By The Military

An article shared on Facebook claims Democratic California Gov. Gavin Newsom was arrested by the military. 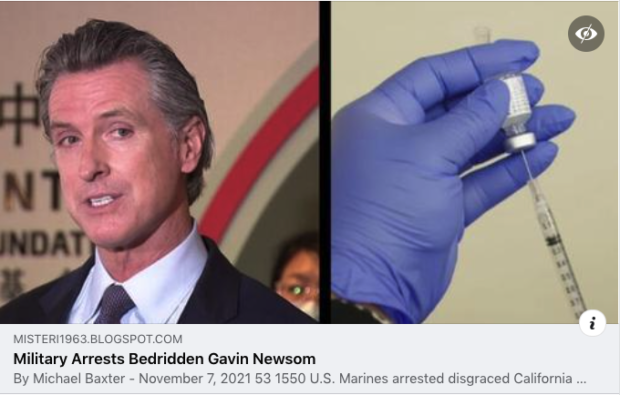 There is no evidence that Newsom was arrested by the military. The claim stems from an article that says it “contains humor, parody, and satire.”

Newsom stayed out of the public eye for nearly two weeks after receiving his COVID-19 booster shot on Oct. 27, which prompted social media speculation about his absence, according to The Los Angeles Times. A Nov. 8 Facebook post links to an article titled “Military Arrests Bedridden Gavin Newsom.” The article claims the governor was arrested on Nov. 1 after he supposedly became ill from his COVID-19 booster shot.

There is, however, no evidence that Newsom was arrested by the military. Check Your Fact searched the Defense Department and the California Governor’s office, but found no press releases discussing Newsom’s alleged arrest. Had he been arrested, news outlets certainly would have reported on it, yet none have.

The verified Office of the Governor of California Twitter account posted a video on Nov. 4, three days after Newsom’s supposed arrest, of Newsom talking about Diwali. Newsom also appeared at artist and model Ivy Love Getty’s Nov. 6 wedding, according to Vogue. Furthermore, Newsom participated in an economic summit on Nov. 9, The Los Angeles Times reported.

The article appears to have been lifted from Real Raw News, a website that includes a disclaimer stating it contains “humor, parody, and satire.” While Real Raw News includes a warning about the satirical nature of its content, the article in the Facebook post does not, seemingly passing the information off as genuine. (RELATED: Image Claims California Is Sending Mail-In Ballots To Voters For Gavin Newsom’s Recall Election Due To The Delta Variant)